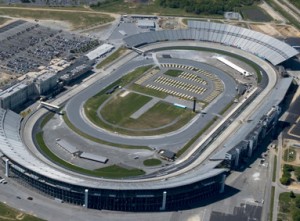 With the conclusion of the big races of May, NASCAR gets down to the weekly business of trying to accumulate championship points with lots of races scheduled for June.  The guys – and one notable gal – of NASCAR will be putting in plenty of miles between races as they travel from Delaware to California and back to Kentucky.

For the June 10th Pocono 400, NASCAR’s teams will only have to go 180 miles north to Pocono Raceway near Long Pond, Pennsylvania.  Jeff Gordon will be defending his 2011 victory (when it was a 500 mile race and sponsored by 5-Hour Energy).  From there the big between-races mileage starts to pile up as they head to Michigan International Speedway in south central Michigan for the Quicken Loans 400 on June 17th.  Denny Hamlin was the winner at last year’s June visit to Michigan.

Then it’s really time to hit the road – and the road course – as they travel all the way west to Sonoma, California for the Toyota/Save Mart 350 at Infineon Raceway.  Things will slow down quite a bit as the drivers maneuver their way around the 2.52-mile road racing course on June 24th.  Kurt Busch was the winner of last year’s annual NASCAR visit to northern California.

It’s a long trip back east just in time to get one more race into the month of June: the Quaker State 400 at Kentucky Speedway on June 30th.  The track is located between I-71 and the Ohio River about mid-way between Cincinnati and Louisville.  Kyle Busch was also the 2011 winner here.

The Tennessee Aquarium in Chattanooga

July 15, 2013 TheRealPlaces Places Comments Off on The Tennessee Aquarium in Chattanooga

When you think “aquarium”, you may think of ocean-based animals – which would make Chattanooga an unlikely location for a major aquarium.  But there’s plenty of aquatic life in America’s rivers, which makes a spot […]

The NASCAR Sprint Cup series visits the two most famous racetracks in the United States in July, with a stop in New England in between.  After 17 races Matt Kenseth is the current points leader […]

The renovation of our regional hotel guides continues this week with the premiere of our guide to hotels in New  York City, TheRealGotham.com.  (Yeah, we know, kind of a dumb name.)  The subways, buses and […]

Reserve Your Next Stay At Over 200,000 Hotels Worldwide With TheRealPlaces Hotel Finder
Powered by Hotels.com